By Claire Cloutier, collaborating editor of the FSO team
Photos from Stars on Ice by Melanie Heaney

At 16, Alysa Liu has already accomplished more than most figure skaters ever will. Liu is a two-time U.S. national champion and recently won a bronze medal at the 2022 World Figure Skating Championships. Liu’s career has been notable for its accelerated timeline. She was only 10 years old when she first participated in the American Figure Skating Championships in 2016. And, at age 13, she became the youngest senior female champion in the United States. This winter, she was the youngest member of the US Olympic Winter Team in Beijing.

Last month, Liu announced his retirement from competitive figure skating. Her decision to step away from the sport at just 16 is consistent with the blistering pace of her skating career.

When Figure Skaters Online spoke with Liu before Stars on Ice’s Boston shutdown, she expressed no doubt about her decision to retire. On the contrary, the 16-year-old is looking forward to having more time for family and friends, and pursuing other goals in life, including, most immediately, college. For now, she is enjoying the touring life and performing in front of the public with Stars on Ice. 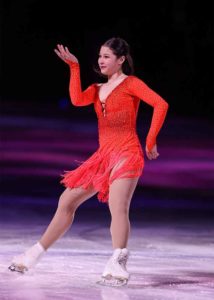 FSO: Stars on Ice is your first big skating tour. How has it been so far?

Liu: It was really good. It was funny. It’s a bit tiring, doing shows almost every day. But I think it’s worth it to be with all my friends and tour across the United States

FSO: And you also did some fun stuff off the ice.

Liu: Yes. We have to go to Disney World, Florida. It was the craziest experience I have ever had. It was definitely a once in a lifetime thing that I will remember forever. We all had fun. Then yesterday [April 29] we went to hershey’s chocolate world [in Pennsylvania], where they have giant chocolates and stuff. We got to see lots of cool sweets they had, and I got a milkshake. So that was also fun. But I would say Disney World was probably the most fun. Or just stroll around New York.

FSO: On your Instagram you have shared some photos from the tour. There was a picture of you in a bunk on the bus. Do you often sleep on the bus or stay at the hotel every night?

Liu: We just slept on the tour bus last night, since we were coming from Hershey, and now we’re in Boston. So we had quite a long drive last night after the show. We slept on the tourist bus, and arrived at our hotel here at 6am. And I slept again.

FSO: What are some of the challenges of skating on tour for the public?

Liu: The shows are tiring and we have to do them back to back. But it’s not too difficult, because we have rest days. And the shows are really fun for me. I really like doing them, especially because the shows I do on the shows are my favorites.

FSO: Tell us about your show programs. 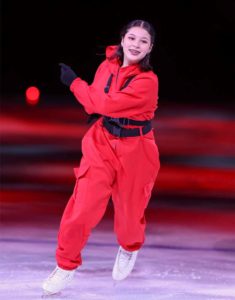 Liu: So I do two solo programs and four group programs with everyone. Group programs are probably my favorite thing to do. I look forward to them every time. For most of them we have matching outfits. And we all skate together, doing the same choreography. It’s really fun. For my solos, I do a program on “Loco” from Itzy, then another program from STAYC called “RUN2U”.

FSO: You recently announced your retirement from competition. It took the skating community a bit by surprise, because you’re so young. But it seems the reaction has been really positive and supportive from most people. How do you feel about that?

Liu: I feel good. I know a lot of people were shocked. But I think a lot of people understand where I’m coming from. I still have so many things I want to do in life. Like, I still can’t drive yet, so I really want to learn. For the past few years, I have barely been able to see my family and friends back home. And I get homesick when I train a lot. So I’ll go and hang out with them more.

FSO: You have four younger siblings, don’t you?

FSO: What do they think of your skating? Have they watched your competitions? Do they follow this part of your life?

Liu: They don’t really, actually. [Laughs] I only remember watching a few local competitions when I was younger. And the Olympics. It is more or less that.

FSO: What is their attitude towards your skateboarding?

Liu: They don’t really care about my retirement. Some of them are just happy that I’m home, and they can spend more time with me. I’m really close to all of them. We fight sometimes, of course. But I am very close to them. The triplets are really funny, and I never get bored when I’m with them. The things they do are very interesting. It’s really fun to hang out with them. 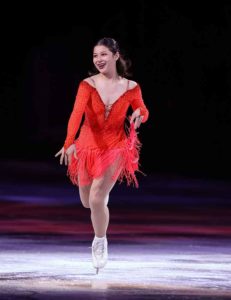 FSO: You said in your retirement announcement that you were glad you skated. What aspects of skating did you enjoy?

Liu: I met a lot of really cool people because of it. I had many new opportunities. In my eleven years of skating, I have had many life lessons and opportunities that I would not have had if I had not skated. So I’m glad I did.

FSO: You also said in an Instagram live stream recently that you don’t necessarily want to have much to do with skating in the future. What aspects of skateboarding did you not like so much?

Liu: The training was really tough mentally. Especially in the last few years, because I was alone most of the time. It was difficult, because I didn’t have the support of my friends and family. It is one thing I didn’t like. Sometimes the skate environment can get a little toxic. Especially with social media and all that. It’s like that. But if I can get away from that, that would be great. That’s also why I made the decision I made.

FSO: In your early years of training, you really pushed the technical limits, doing quads and triple Axels. Looking back, how do you feel about getting into this difficult technical content at a younger age?

Liu: It was certainly a lot easier when I was younger. So I didn’t think too much about it. But, growing up, it was much more difficult. Especially mentally. So yes, I decided not to push. I hurt myself once, when I had a hip injury. So I decided to stop doing quads. I quit for several reasons. I didn’t want to hurt myself beyond repair, you know? I don’t want surgery. Now my hip is fine. So I’m glad I stopped when I did.

FSO: In the future, I know you’re thinking about college. Do you keep the possibility of doing more skating tours in the future?

Liu: Yes, I’m definitely keeping it open. But it is not certain. My top three colleges would probably be UC Berkeley, Stanford, and Barnard. Yes, these are my first three. I’m applying, but I don’t know when I’ll start.