There is a contested race for the Lake County sheriff/coroner on primary election ballots mailed to registered voters last week.

Sheriff Don Bell has held the position since 2015, after defeating three other Republican candidates in the 2014 primary election. He is being challenged by Police Sergeant Ronan. Corey White Jr.

Both men are running as Republicans, so the name of the primary election winner will appear on the November general election ballot as an unopposed candidate.

Bell resides in Ronan, where he was born, and graduated from Ronan High School. He and his wife have been married for nearly 42 years and have four adult sons. Bell earned an associate’s degree in computer science from Salish Kootenai College. He volunteered as a scoutmaster and as a youth baseball coach at Pablo. He was part of the volunteer security forces at the 2002 Winter Olympics in Salt Lake City.

Bell has 30 years of experience as a Tribal Police Officer and Sheriff/Coroner in Lake County. He won the state’s Officer of the Year award in 2012. He also received the FBI-LEEDA Trilogy Award after completing all three leadership training programs. He is a graduate of the National Sheriffs’ Institute and the FBI Intermountain Law Enforcement Executive Command College.

Ronan’s police sergeant. Corey White Jr., 30, is married with three children. He was born and raised in Polson, where he currently resides, and graduated from Polson High School. He attended the University of Phoenix and graduated from the Montana Law Enforcement Academy.

White volunteered as a firefighter and with the EMS. He is also a volunteer organizer of the Mission Valley Super Oval stock car track. He has participated in and organized highway cleanup events and volunteered as a speaker with Boys and Girls Clubs of America and Ronan/Pablo Schools.

White has served as a law enforcement officer for the past 7.5 years – as a patrol officer, patrol deputy, corporal, sergeant, deputy coroner and deputy sheriff.

He was commissioned as a community policing officer, a program through which he created chaplain and explorer positions, and advanced the reserve officer program. He also set up a books for badges campaign on social media, blue badges for autism awareness and helped organize a teddy bear hunt for the community. He was selected as the Ronan Police Department’s 2019 Officer of the Year.

Q: What makes you the best person for the job?

Bell: Before taking office in 2015, the Lake County Sheriff’s Office was in turmoil and was losing the trust of the community. I worked hard to restore trust and stability in the office. Financially, I am responsible for eliminating tens of thousands of dollars in unnecessary overtime that took place prior to my tenure. Since taking office, I have exercised due diligence as a leader in addressing disciplinary issues. This avoided controversy, which leads to public distrust. Under my leadership, Sheriff’s Office employees enjoy a professional environment where everyone does their part to help keep our county safe. Additionally, I have…worked closely with the Lake County Commissioners on issues related to Public Law 280 to address our overcrowded jail. …Because I fully understand these issues, I am the best candidate to navigate the sheriff’s office during this time.

White: I will be a sheriff who cares about the citizens of Lake County, with my experience, carrying with me several certifications that are directly and indirectly related to my job. I will be a full-time sheriff working alongside deputies and leading by example. I will be a sheriff who will be seen in communities, helping to solve crimes and uphold laws. All employees will be expected to remain professional and treat citizens with respect and dignity, as we are public servants. I will work alongside the community and be transparent with the operation of the sheriff’s office. I am dedicated and driven to create a better future for the citizens of Lake County.

Q: What do you think should be the Lake County Sheriff’s top priorities?

Bell: The current top priority is to remedy the overcrowded prison. … The solution is very costly and, given the PL-280 arrangement, it should not rest solely on the shoulders of Lake County ratepayers. We have never been closer to a solution…than we are now thanks to the efforts of county commissioners and my office to raise awareness of the problem and pressure on the state to meet its part of the PL-280 agreement that lawmakers reached 60 years ago. from. The other priority is drugs and drug-related crime. Through partnership with other local, state, and federal agencies, we have pooled resources and built critical relationships to fight this epidemic…Solving the jail problem would likely accelerate our success in this priority.

White: Better response times by setting up patrol zones, so all parts of the county receive service on a regular basis; a better management structure that allows a supervisor to be on day and night shifts; targeted drug enforcement by working alongside federal, state, and local agencies to increase focus on drug issues in Lake County; more training for Sheriff’s Office staff so that they can perform their duties effectively — I will prioritize training for all Sheriff’s Office staff in crisis management; budget-aware leadership that will ensure that the office makes the most of the budget; retain and properly train staff to lighten the budgetary burden; progress to a new prison by actively seeking alternative options rather than just talking about them. As a sheriff, blame cannot be placed on citizens or county commissioners. It’s the sheriff’s job to make sure the community is safe, and getting a new jail is a critical part of that. Part of my plan for a new prison will be to provide inmates with counseling on chemical dependency and mental health so that they receive something to improve before they are released from prison.

Q: Do you have anything else to add?

White: I’m asking you to do your research and select Corey White as Sheriff of Lake County. I am focused on providing a brighter future for all and would like to team up with you for desperately needed change at the Sheriff’s Office.

Ballots must be returned to the Lake County Courthouse Elections Office by 8 p.m. Tuesday, June 7. Residents can check their voter registration status by visiting app.mt.gov/voterinfo. The county’s website has a frequently asked questions section about the election at www.lakemt.gov/election/faq.html. 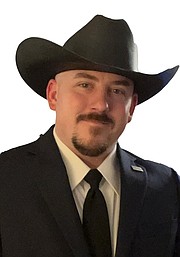