Rio Olympian Beth Potter got into triathlon with a move to Leeds in 2017, but returned to athletics consciousness when she ran what was, at the time, the 5k fastest women’s ever (14:41) at Barrowford in April last year. .

Although her performance was not ratified as an official world record, she recalled that the class is permanent, even when her participation – in athletics at least – was temporary.

“Triathlon is always very difficult because all the very good guys are British, so I’m progressing to the top, but I just haven’t seen it happen. [on the track]. I just didn’t think I was good enough.

The 30-year-old has created her own unique training structure in Leeds. Jack Maitland, former head coach of the Leeds Triathlon Centre, oversees his program and, along with two-time Olympic triathlon champion Alistair Brownlee, also helps him with his cycling. Andy Henderson, who has a talented group of athletes including Olympic 800m runner Alex Bell, tends to his race; Coz Tantrum, former coach of the Brownlee brothers, takes care of his swimming; and Dane Mitchell is her gym trainer.

The 2019 European triathlon champion made history at Gold Coast 2018 when she became the first athlete from Team Scotland to compete in two sports – athletics and triathlon – at the same Games. She will represent Scotland in the triathlon at her third Commonwealth Games in Birmingham this summer.

“I know I’m in good shape, but I don’t know how I’m going to measure up to other girls,” she says. “I don’t want to put a mark because I don’t want to be disappointed or unrealistic, but I will aim for the podium.”

As a runner, Potter was coached by Mick Woods from 2012 to 2018 and averaged 80-85 miles a week while working full time as a physics teacher. Now she rarely exceeds 30 miles per week (running). “It’s about getting the quality,” she says. “I ran the 2:41 p.m. 5k mostly swimming and cycling. My running just supplemented the huge aerobic engine I had.

Tuesday: (morning) 90 min VO2 session (pool) e.g. main set 1500m-2km high level work, reps approx 100-200m, no more than 400m; easy spin (75-90min) in the middle of the day either on the turbo or outdoors; (evening) track session – only hard running session of the week currently – with a group based at Leeds Beckett University: a little tempo, a little track.

Thursday: key session day; (morning) swim 1h30: “It’s a threshold day, so it’s a big block of thresholds in the pool divided into longer repetitions 300m/400m after short recovery then straight for an easy race 45-60min. » ; (pm) VO2 session on the bike with something like 24min of effort and a mix of reps.

Friday: easy swim: “We call it ‘Toy Friday’, we get all the toys out in the pool, lots of upper body equipment, parachute, sponges, paddles and we have a 300m block divided into 50 ms and 25 ms for some very fast. stuff.”; workout and relax the rest of the day.

Saturday: (morning) group ride with the Leeds cyclists, about 45min of effort in the race but the whole race is quite fast: “We brought it in at the start of the year and planned to do it for 2 -3 months, but we’ve ended up keeping it. It’s really helped me ride this year. I’ve learned a lot… from the little habits I’ve picked up that are good habits.” (pm ) 45min easy run. 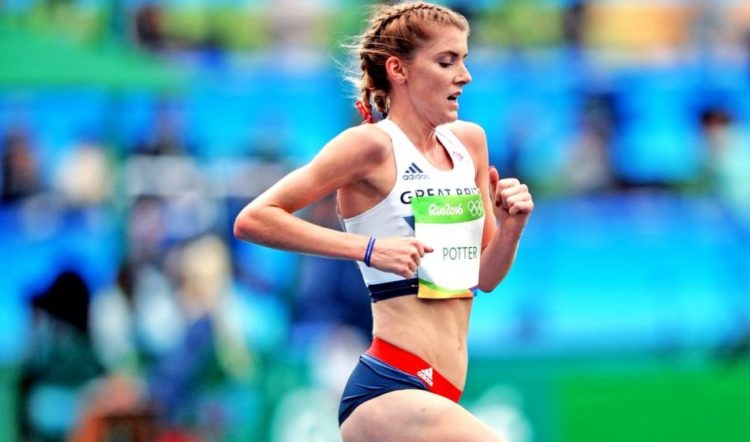 “I still love the track! I really like my Saturday group ride with the cyclists too, it’s a good atmosphere and a good community…. I like anything VO2 or threshold in all three, I appreciate that aspect.

“The only thing I struggle with is doing my Sunday race. All the runners leave in the morning and I am often alone in the afternoon. I’m really tired on a Sunday afternoon and thinking about it, even if it’s only an hour, I just have a hard time dragging myself on the weekend.

As a young athlete, Potter – recently named Garmin’s UK ambassador – excelled in swimming and running. Given her relative inexperience to start with, her biggest gains in triathlon, at least so far, have come on the bike where she opts for the support of Garmin’s Edge 1030 Plus model.

“I really like that you can download routes,” she says. “It was so helpful to have sat nav on the group rides during the winter so that when the riders split up I know where the route is going.

“I often repeat the same sessions too, so now I have a spreadsheet and we like to compare sessions week by week, follow the essentials. I think throughout the winter I have become stronger, and Garmin data proves it.

For runners considering the transition to triathlon, Potter’s advice includes a gradual introduction and choosing quality over quantity. “It’s also a question of pleasure,” she adds. “Join a club, train with people who are better than you and don’t dwell on the times when you were running as a runner.”

» This article first appeared in the May issue of AW magazine, which you can buy here