For me, this has been my favorite escape. Working nine to five in the winter means spending most of the daylight indoors. Many evenings after work I gathered my tour setup and made my way up the hill to town. I would voluntarily stagger my departure so that when I put my boots and my skins on the big spotlights, I would go out. The snow was reflecting just enough light from the nearby street to allow you to see while you were grazing. Finally, I turned on my headlamp, but only after admiring the dazzling night sky. My lungs have always enjoyed the sting of the steep slope, which engulfed the cool mountain air as I walked forward. The best part was getting to the top. Looking back towards the city, you could see the valley below glowing orange and gold from the street and city lights, and that view never got old. All the stress of the day still seemed to dissipate as I slowly made my way to the top.

I know this little hill meant something completely different to the community during the height of the COVID-19 pandemic. In March 2020, the world stopped screaming. When everything was closed during lockdown, Snow King was one of the few places one could still visit. Its slopes felt like a little reminder of what life was like before the pandemic, you know, when you met friends and neighbors. We followed the rules and kept our six-foot distance, but relished the chance to exchange a smile and a wave. Thanks to the generosity of a handful of Jackson residents and Exum guides, the main ski slope has remained maintained. I’m not exaggerating when I say its 1,500 vertical feet was more rewarding than a majestic peak in the Canadian Rockies or the Swiss Alps during those first months of lockdown. We all relished the tricks we did on the King during this tumultuous time. These were moments of welcome escape to feel lost in the ever changing tides of the pandemic. The King was just one of the many buoys that kept our community afloat.

groomed and ready to ski at Snow King. | Photo by Katie Lozancich.

Returning to Snow King for the In Pursuit of Soul movie journey, I was delighted to see the resort from a new perspective. While taking in the view of Grand Teton National Park from the top of the resort, Snow King President and CEO Ryan Stanley explained to us that the King is often referred to as ‘the town’s babysitter’. Come here on a weekday afternoon right after class ends and you will see why. The slopes are teeming with children of all ages, and they roam the resort as if it were a huge snow-covered playground. One of those programs is the Jackson Hole Ski & Snowboard Club (JHSC), which is the community’s oldest non-profit organization. JHSC’s story is woven into the fabric of Snow King. In 1938 the group organized their first mountain race and have been operating here ever since. The organization has welcomed hundreds of athletes and its alumni feel like a list of who’s who in the snow sports world. It ranges from Olympic alpine runner Resi Stiegler to snowboarding legend Travis Rice. 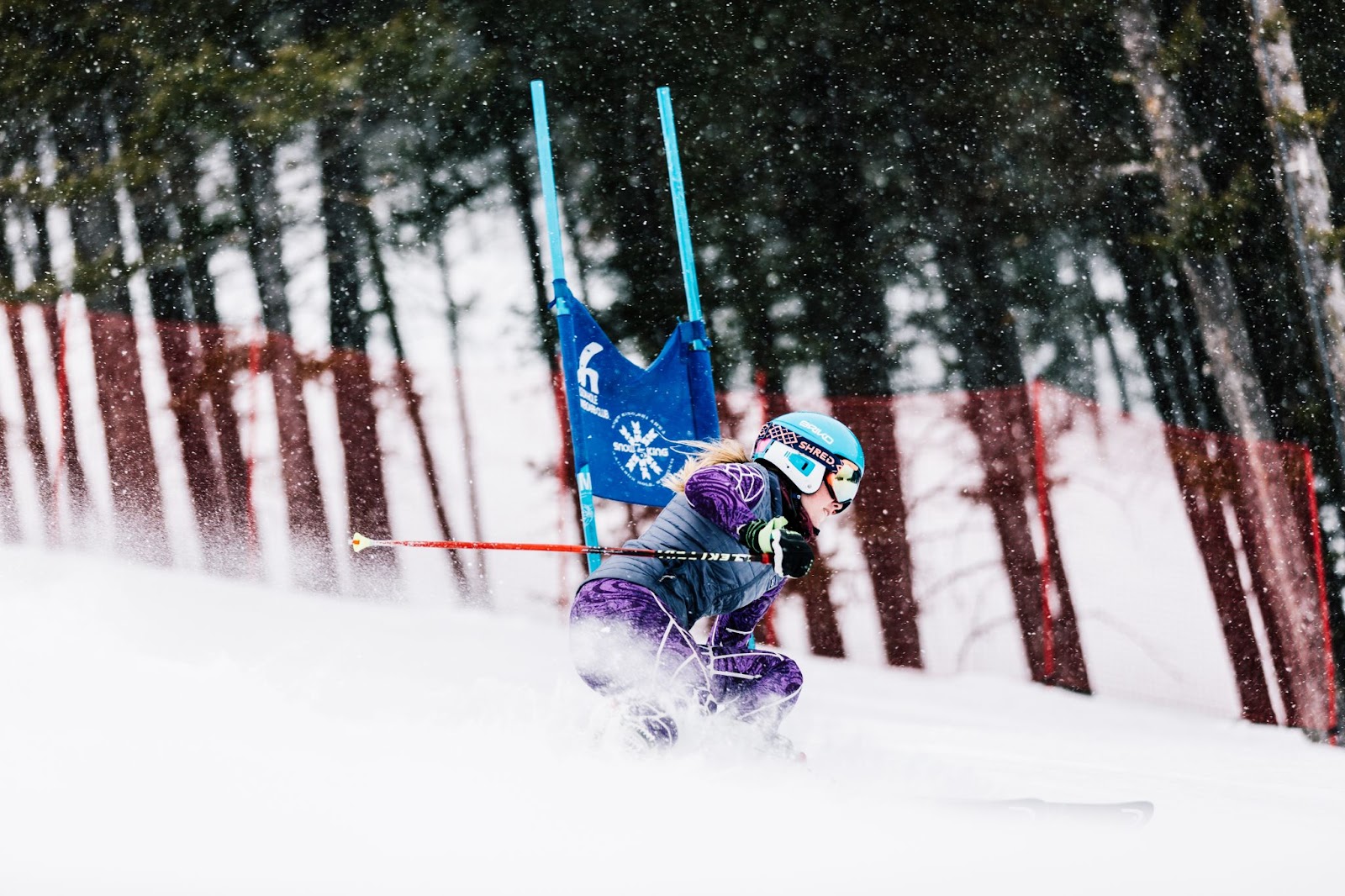 Children’s programs like the Jackson Hole Ski & Snowboard Club rely heavily on the Snow King trails throughout the winter. | Photo by Katie Lozancich.

What was once a humble alpine ski club now embraces all kinds of young people with a focus on skiing and snowboarding. They offer everything from alpine, nordic, freeride and, more recently, off-piste and mountaineering programs. We saw the work of the JHSC unfold firsthand during a FIS time trial. There is a GS course set up and the young riders fly from side to side at speeds as you will drive your car on the highway. While watching the runners, I came across a skier aiming for Olympic glory. Benjamin Alexander is currently training with the JHSC Masters program. He hopes to represent Jamaica at the 2022 Winter Olympics as the country’s top downhill skier and has been a diligent student, training with the program as much as he can. His goal is bold, simply because he has only been skiing for five years. Nonetheless, Alexander is determined and is grateful to have a resource like Snow King for training. “The slope, the quality of the snow and the ability to park my car 20 feet from the chairlift make Snow King quite special. It’s a ski-in-ski-out chairlift every day, ”he explained. His time with the King also inspires him. He thought about this thoughtfully as we got into the elevator together. Below us, packs of children rush enthusiastically onto the slopes. Some of the little ones can barely hold a pizza, which made him smile. “If you didn’t have the newbies then there wouldn’t be new people entering the sport and he would die,” he said. We need spaces like Snow King to make sport accessible to all kinds of people, he argued. 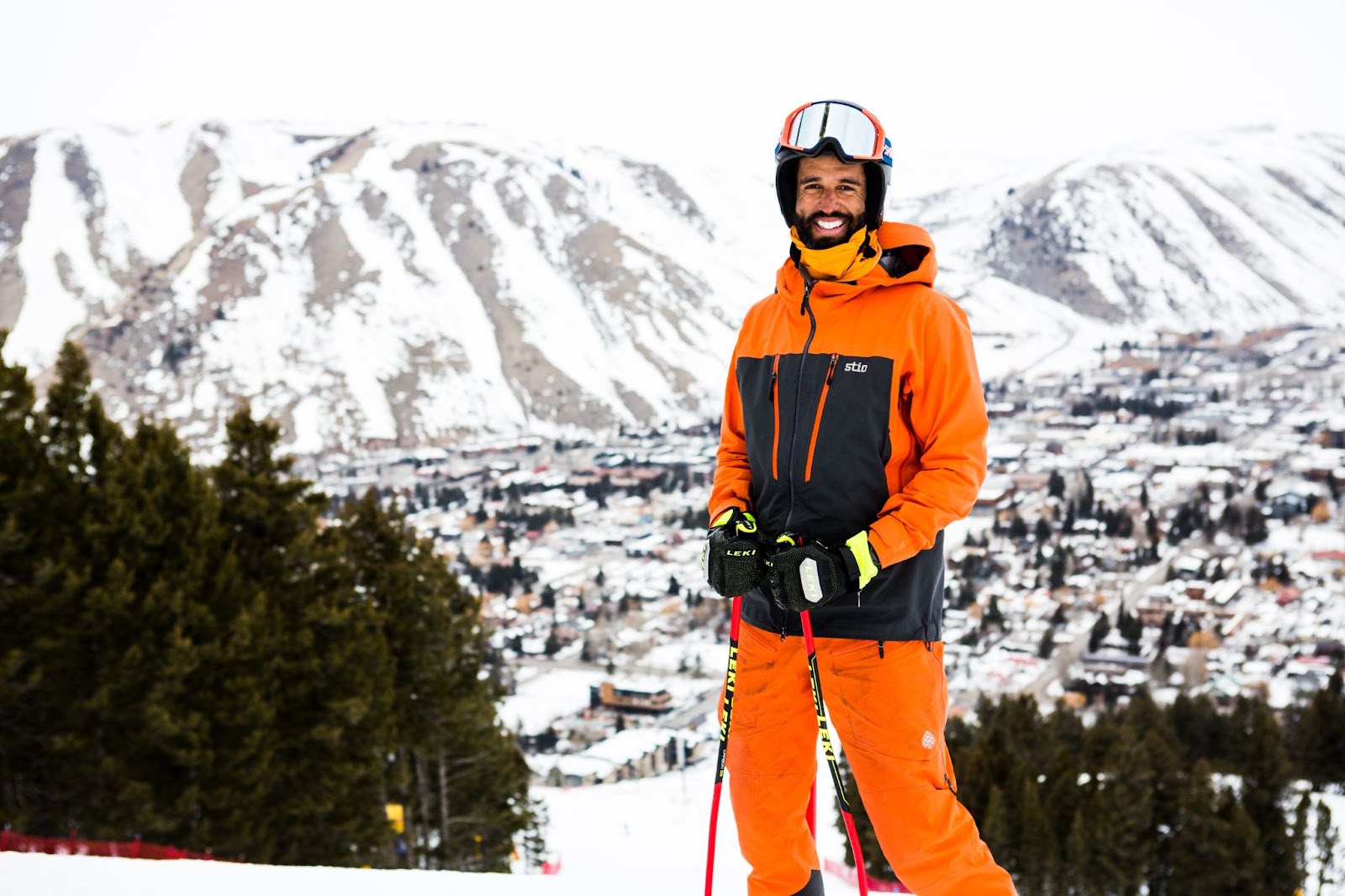 Olympic hopeful Benjamin Alexander is grateful to have Snow King as a training track. | Photo by Katie Lozancich.

While their cake goal is to become one of the best ski and snowboard clubs in the country, JHSC doesn’t equate success with producing Olympic medals and world champions. For them, sharing these sports means sharing important life skills with these children, which are often used off the slopes. That’s a sentiment shared by another nonprofit Coombs Outdoors, which also collaborates with Snow King for its winter programming. Nine years ago, Emily Coombs started the organization in memory of her husband and ski legend Doug Coombs. Recognizing the impact skiing and the mountains have on their lives, Emily hoped the foundation could remove prohibitively expensive barriers that prevent many low-income families in Teton County from playing sports like skiing and snowboarding. In their first winter, the team helped 28 children hit the slopes of Snow King. Nine years later, the organization has grown and now supports more than 250 children in Teton County. In 2019, the Doug Coombs Foundation became Coombs Outdoors, becoming more than just a snow sports organization, but also something that empowers children in all aspects of the outdoors. Skiing and snowboarding, however, remains at the heart of their work and they continue to collaborate with Snow King to bring more children to the snow. 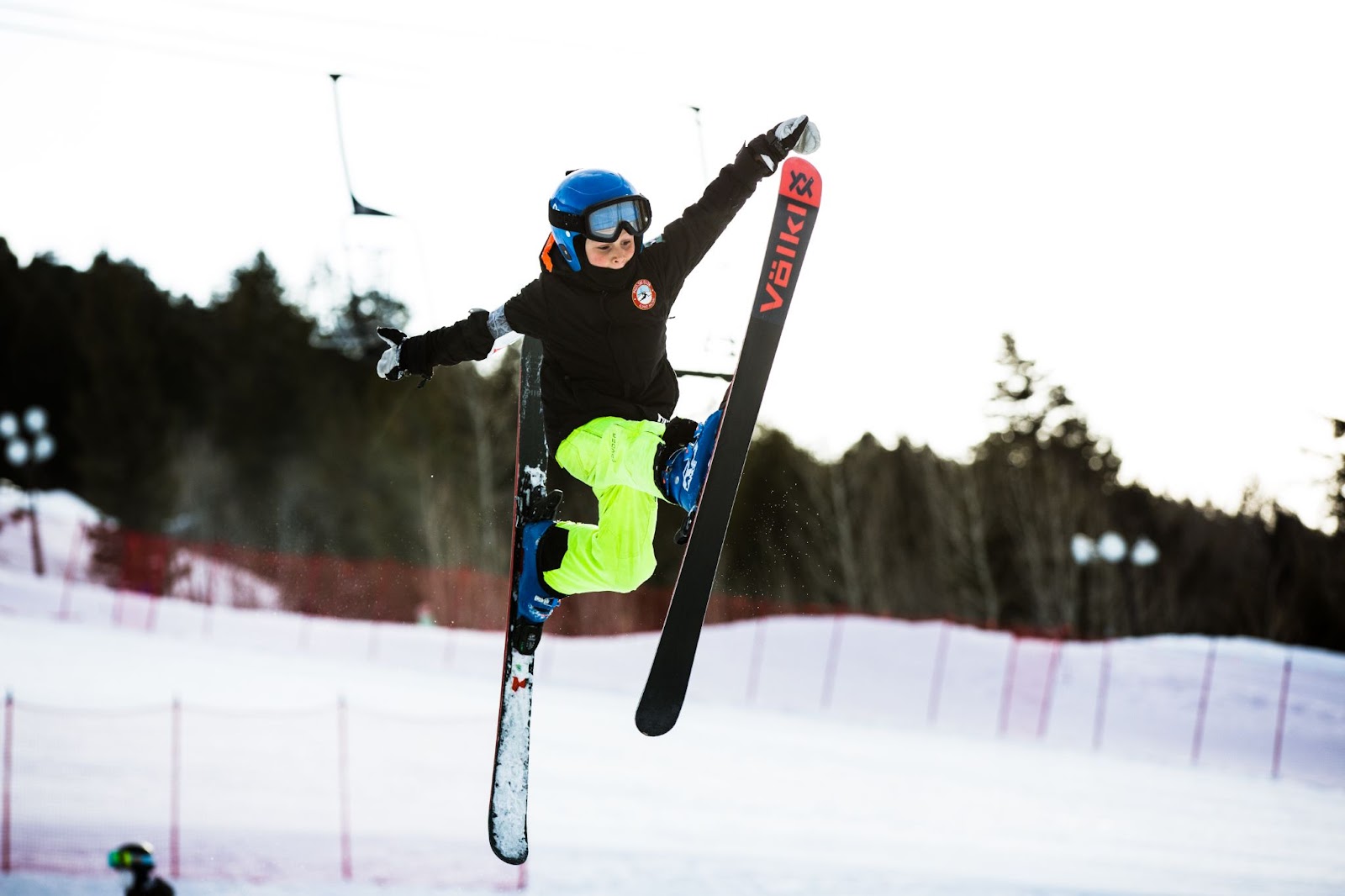 The kids had lots of tricks to show off during the JHSC Freeride rail jam. | Photo by Katie Lozancich.

At the end of our tour, we stayed around to watch the Wednesday Night Light Rail Jam from the JHSC Freeride program. He was at the foot of the mountain and took in children from the community. They played on little kickers and rails, throwing everything from wide-spread eagles to daffys to backflips. An energetic crowd watched sideways, cheering the little groms with overwhelming enthusiasm. Meanwhile, Snow King’s slopes were buzzing with skiers and snowboarders trying to squeeze in one final lap before the sun sank below the horizon. From top to bottom, the station was alive. Looking at it all reminded me that this small north facing ski resort is more than just a mountain. It stands tall and steep as a gathering place: whether it’s for an early morning peel, a quick lunchtime ride, an after school outing with your friends, or a moonlit ski tour. – the king is still faithfully there. 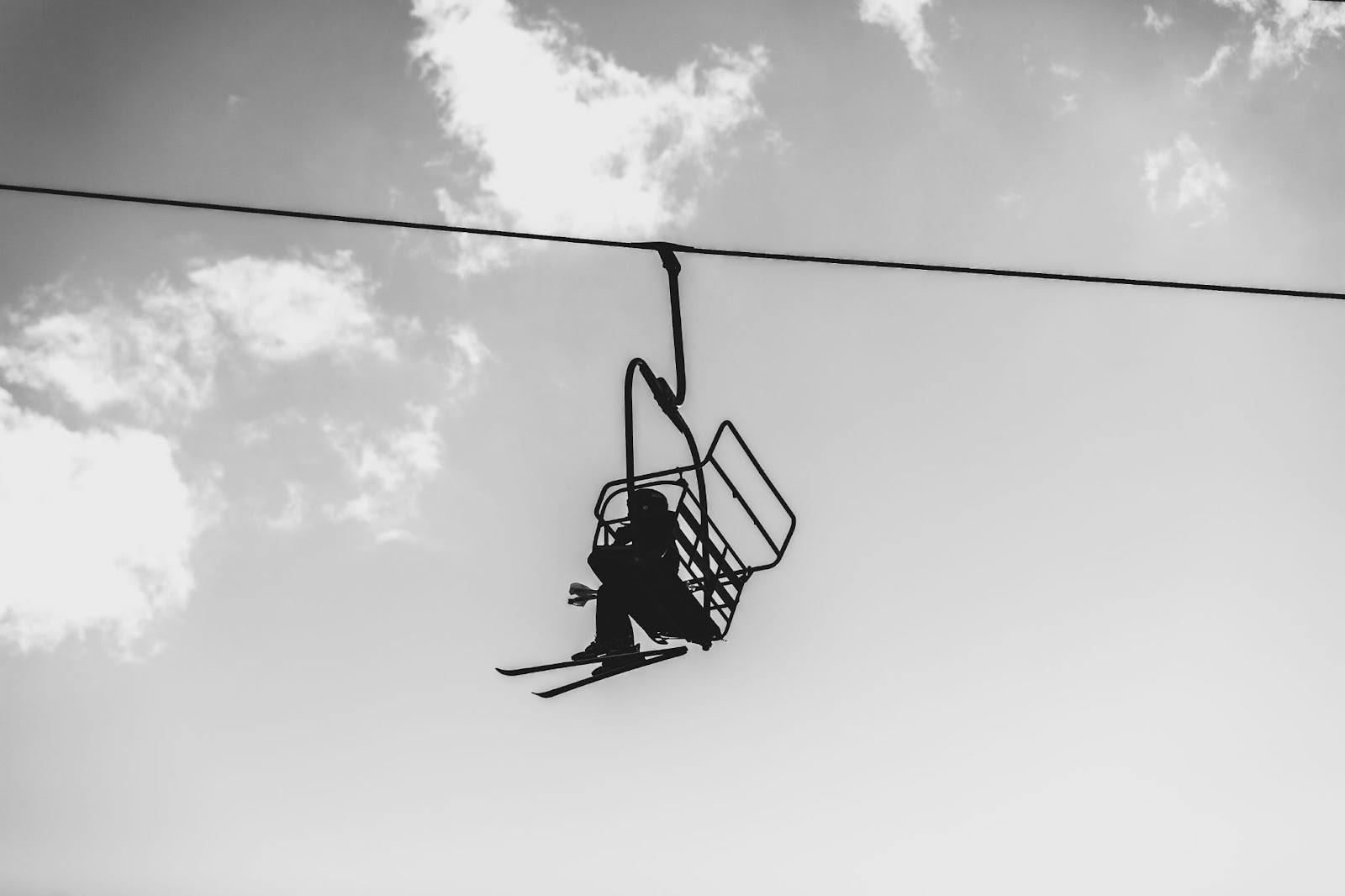 The king is still there. | Photo by Katie Lozancich.

Learn more about the Snow King