With most of the boardwalk leading to the Cape Alava and Sand Point trails in poor condition, Olympic National Park the staff try to decide on the best way to carry out the repairs and ask the public’s opinion.

The Cape Alava and Sand Point trails access either end of a 3-mile section of beach, creating a 9-mile triangular wilderness hike, starting at the Lake Ozette trailhead. Ozette is the busiest starting point for nighttime wilderness use in the park. Approximately 9,500 linear feet (70 percent) of the total 13,533 feet of boardwalk on the Cape Alava and Sand Point trails are in poor condition. These trails are in designated wilderness. 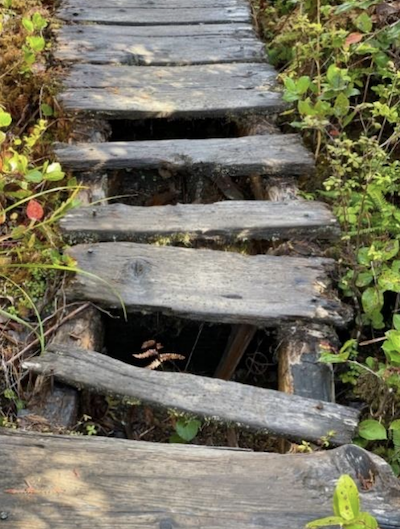 A deteriorated boardwalk section along the Sand Point/NPS Trail

One option is to simply tackle small parts of the boardwalk repairs by hand, but the park says this approach would not be enough to track repairs because “The structural components of the boardwalk would continue to deteriorate faster than they can be replaced given the current capacity of the track crew.”

Another option would be to use helicopters to fly materials to replace worn sections, while a third option would be to create “toll highways” – a series of wooden crates at ground level filled with gravel and land – in areas that would not influence surface water flows.

More details on the proposals, and a page for leaving comments, can be found on this site. Comments are taken until April 26.