Olympic Steel (NASDAQ:ZEUS – Get Rating) released its quarterly earnings data on Thursday. The basic materials company reported earnings per share (EPS) of $3.23 for the quarter, beating analyst consensus estimates of $2.16 by $1.07, MarketWatch Earnings reports. Olympic Steel had a return on equity of 35.85% and a net margin of 5.24%. In the same quarter of the previous year, the company had earned earnings per share of $1.97.

In other Olympic Steel news, COO Andrew S. Greiff purchased 2,500 shares of Olympic Steel in a trade dated Monday, March 14. The stock was purchased at an average price of $28.79 per share, for a total transaction of $71,975.00. The purchase was disclosed in a legal filing with the SEC, which is available on the SEC’s website. Additionally, insider David A. Wolfort sold 45,351 shares of Olympic Steel in a trade that took place on Thursday, March 10. The stock was sold at an average price of $30.99, for a total value of $1,405,427.49. The disclosure of this sale can be found here. 17.40% of the shares are held by insiders of the company.

Separately, StockNews.com downgraded Olympic Steel from a “buy” rating to a “hold” rating in a report released Wednesday.

About Olympic Steel (Get a rating) 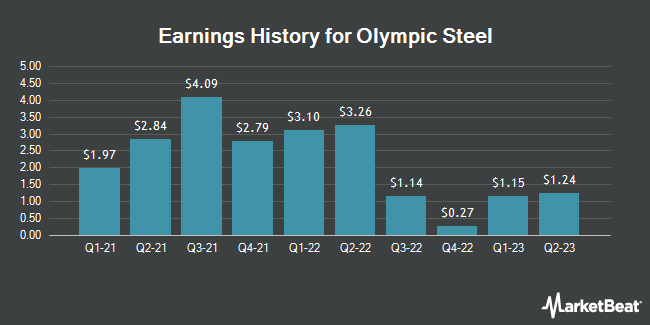